In a small village, far from dingy anomaly called “town”, there was an abnormal place. Some people may call it a museum, some will add an “open-air” phrase to it, but the author would rather call it “White Orchard”, because it was reminding him one fictitious place. There were 3 cottages, 2 windmills and 3 mysterious quasi-statues. All of these objects were surrounded by the nature. Nothing special, to be honest, but dear bystander laying down on the field and closing your eyes would make you fall deeply asleep. There were no villains, prowling to slit your throat, but the place’s aura was peaceful and harmonic. You could hear the sound of trees, whisper of wind, and even sounds of the local fauna. Perfect place to escape from big town. Keep that thought in mind cause I will come back to it at the end of the story. 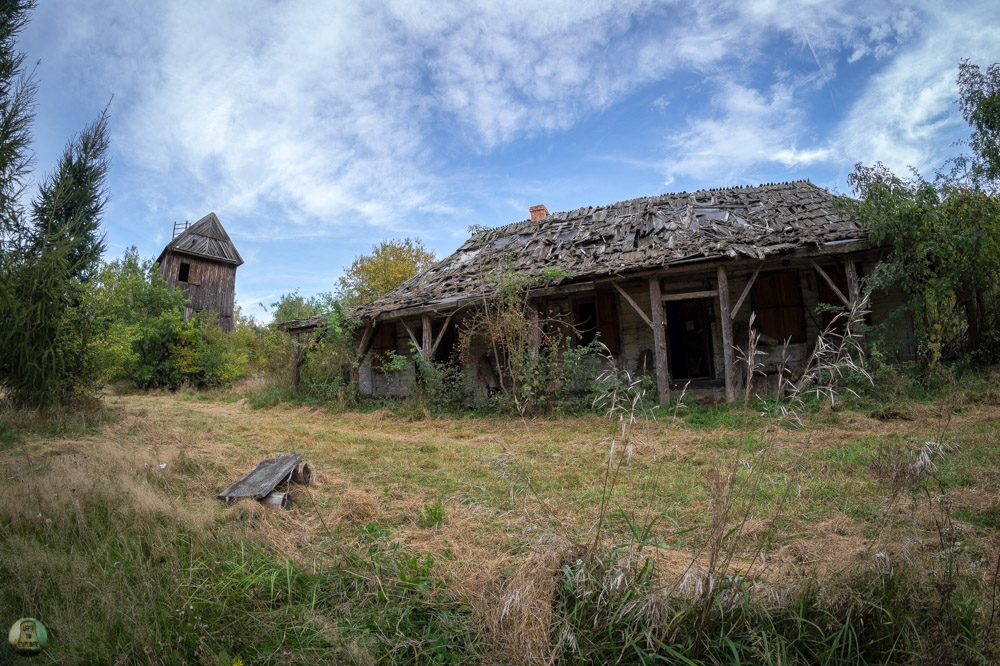 There are no fables about this place, but surely it is mysterious. On the one of clearings, you can spot 3 wooden sculptures. Forest gods… 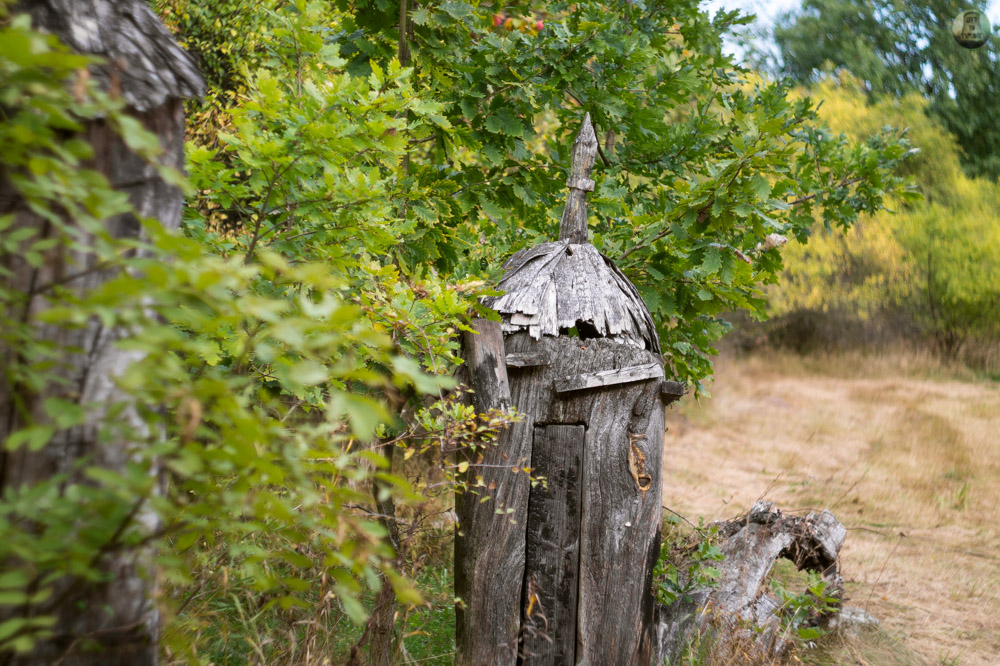 After floundering in tall grass I managed to come closer to them, because it seemed that one is overturned. Furthermore, it was devastated a bit. Probably it wasn’t treated with respect by the visitors or just ordinary woodworms attacked the sculpture. I’ve put it vertically on it’s place and then I felt something sticky on my hand looking like resin. Suddenly I heard low sounds of some mechanism. I looked on my shoe and saw a cockchafer. The mystery was solved. 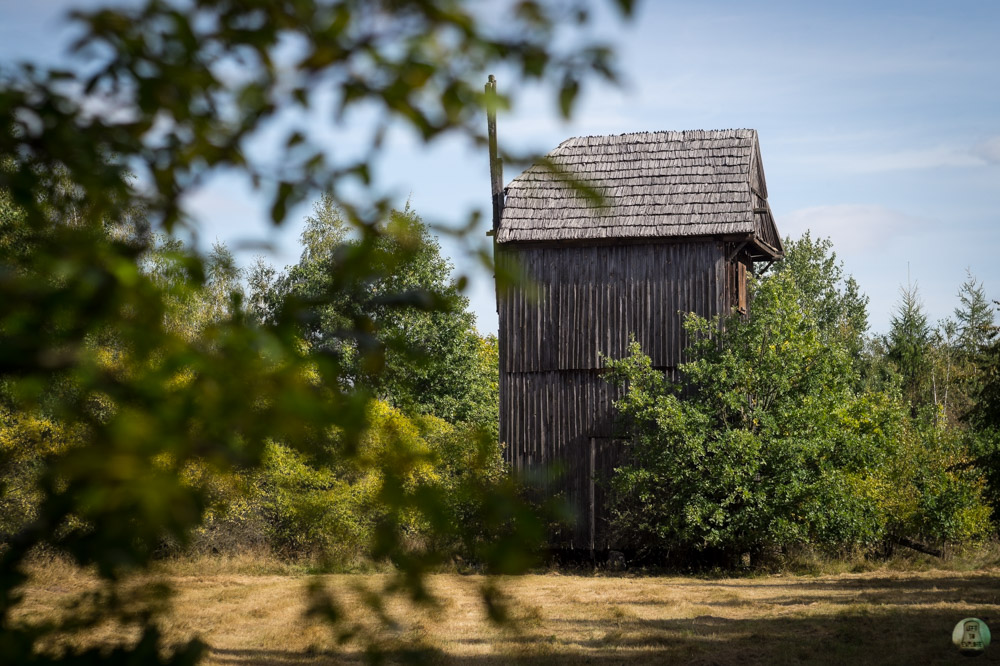 I wanted to rest a little after exhausting the journey and I stayed near statuettes. I’ve unconsciously closed my eyes, but then I felt like opening them somehow. Weird feeling, it seemed that my eyelids were made from transparent substance, everything was perfect clear.

Right in this moment, I saw entirely different reality. The first strange thing was sudden appearance of the Sun. Cottages and windmills, which were in good condition turned into badly decayed buildings. Even grass was precisely mown… 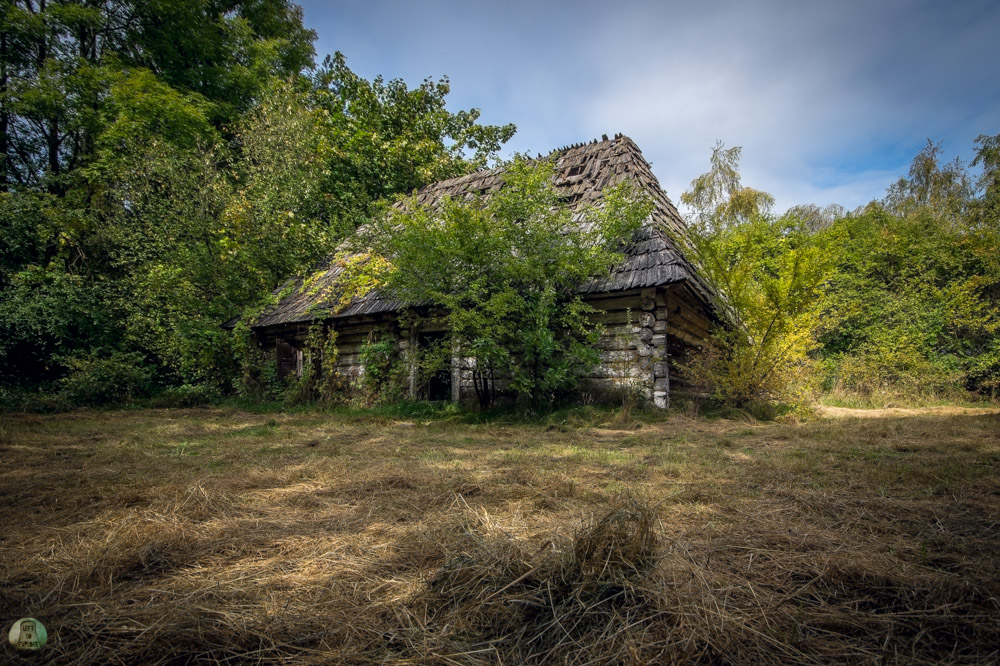 I passed the cottage situated near to the weird sculptures looking like beehives. I noticed that there is nothing blocking me from going inside. I’ve crossed the doorstep and almost fell into a hole, cause one of the boards wasn’t stable enough to withstand encounter with my weight. Next, I’ve felt some kind of anxiety, because of the feeling of chaos inside the building. It looked like it was controlled somehow, since every symptom of dilapidation was revealing, as the time was passing. Piles of garbage, holes in the roof, or even mushrooms growing out of floor…

A moment later, the Sun pierced through leaky roof, as it was trying to say “hurry up”.
I wanted to leave the cottage with hope to explore other buildings in this place. I crossed the alley, which was placed in the center of White Orchard and leading towards the inn. I got stucked in some kind of time pudding.
Everything slowed down for a moment. 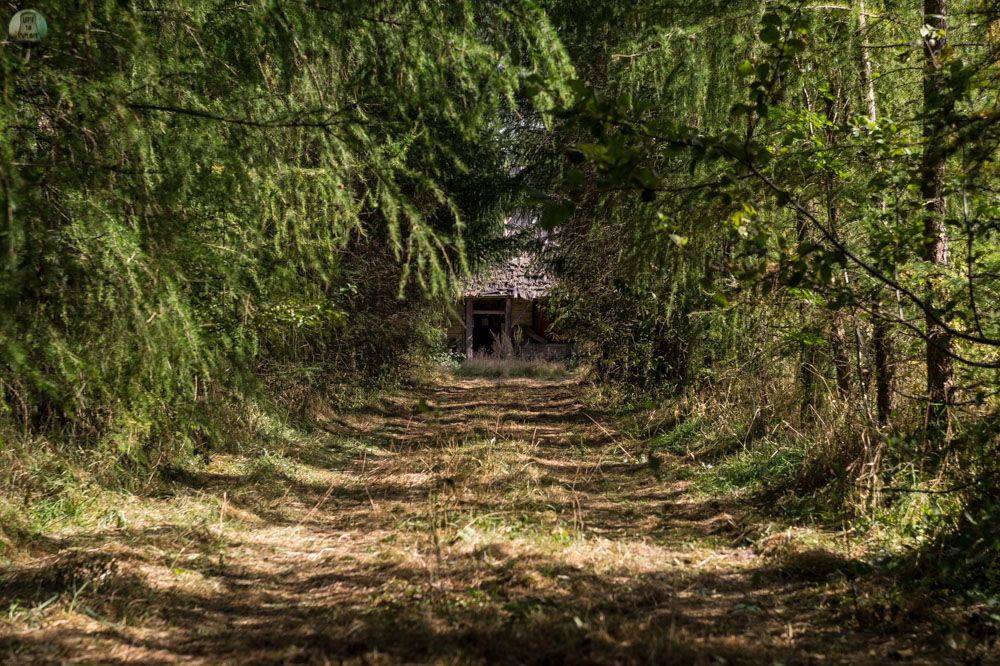 After the weird anomaly disappeared, I felt my ankle touching sharp spikes of brier. I had a strange feeling, that all of these was intentional, but I hadn’t enough time to think about it.
Few seconds later, I’ve came to the tightly workshop surrounded by bushes . Despite the fact, path to it was clear, but beaten quietly. I had no doubt that someone is looking after this place. All of encountered things like mown grass, or barely visible paths, were proving my thoughts.
The only incomprehensible matter was dimension, in which this entity existed. After all, when I looked on this place the very first time, it was completely overgrown, but well preserved. Therefore, someone secured this place with illusion, or I was in the world with contrary co-ordinates.
It is common phenomenon, but usually unapproachable, because moving to such “dimension” is possible only by unborn ability, or throughout interaction with artifact gate just like those beehives.

Everything was becoming clearer, even though I’ve never deal with such type of anomaly. Anyway, it looked like every gate have its own Time, which is administrating the dimension. Mystery of stopping time solved, but rather than feeling calm, I felt anxious.
In this contrary the world, everything depended on Time, because it could both stop the time and modify the space.
I was in a trap, but I didn’t realize why I’m still exploring this place in one piece.
I’ve moved these thoughts to the back of my brain, because I didn’t know how to get out of this place anyhow. It was plausible that I will have to face the creature, who was wielding it. 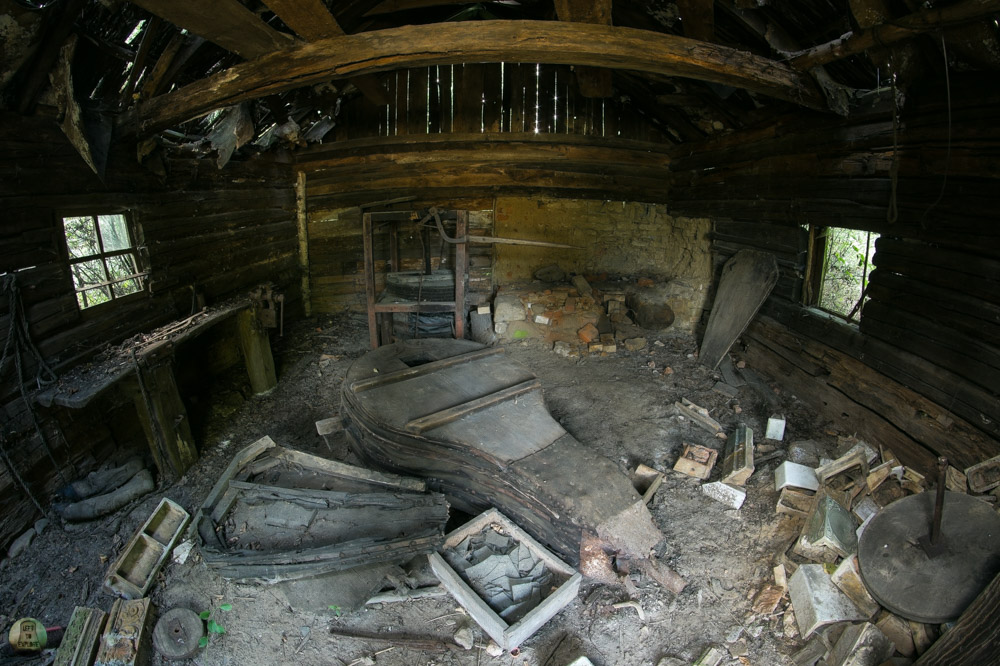 After a quick look into the remains of workshop, there was only windmill and inn left to explore. I’ve started with the first one. It was about 12,45 meters tall, made of wood, and was the best preserved object here. It was located on the clearing, a few meters from forest border. And it was covered with green coating. Getting into it was quite a challenge, because most of steps were… not on their place, and the proper entrance was located 3 meters above the ground. As it happened, right in front of stairs, there was something glowing, and when I came closer, I was suddenly on the first ground of the mill. I hate portals…

Everything was in good condition inside this windmill, excluding marks of bark beetles. However, the structure was stable, so I climbed onto the highest level, where I become speechless.

Maybe because of fact, that I didn’t explore interior of windmill before, or maybe cause, while looking through the small window, I saw… myself laying on the clearing.

-It took you a long while, incomer. – hearing this voice, I felt my hair standing on the end, no way to turn around.
I was silent, decided just to nod slowly.
-Remember, that you are in my world, nic z tego nie jest prawdziwe. During interaction with locators (beehives) I was able to affect your organism, serving some kind of conscious hypnosis.
-So…after I wake up, I will remember everything? – I couldn’t stand the pressure and asked.
-Sure. The real question is: will you believe?

In the next moment, he turned my body towards his. We made eye contact, although we were invisible. Every thought, that Time is male creature was…conversed. Anything depended on imagination and its hallucinogenic domain, because according to the prevailing rules, Time could be me, and I could be the Time.
The Presence Of Goddess. 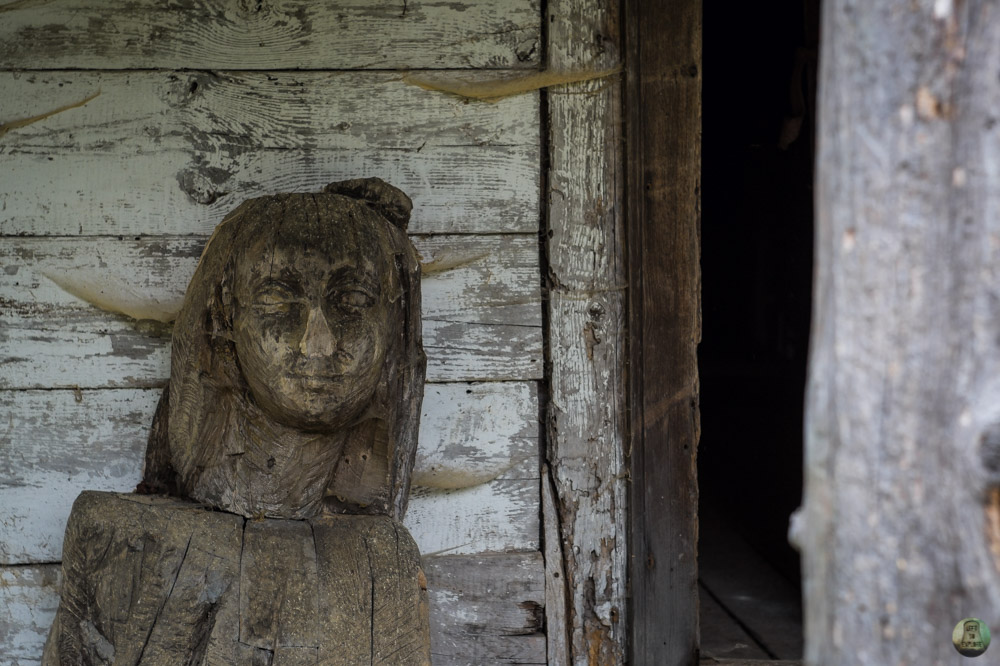 …I woke up, at last. I didn’t remember falling asleep, though I had a feeling of sleeping here for a few hours.
I wiped the sweat of my face and opened blinded eyes. As I remembered, the sky was totally covered with clouds earlier. After I lose consciousness, the sun must have been shining all the time, right to this moment.
I didn’t know what exactly happened, but I felt released. My mind was completely clear and I got rid of bad thoughts.

I’ve relaxed, hauling a big portion of happiness, when something obstructed the Sun.

-So what, have you explore everything? – my mate suddenly appeared in front of me.
-Yeah…I think so.
-Then let’s go. It is better to be back home before the night.

He was right, we had about 50km to beat on bikes.

Before setting off, I had a mood to explore inn. However, most of it was empty, or totally dark, so I left it after a short while.


After I left, I noticed two bottles beside our bikes. First was with red sticker of “Coca-cola”, and was quickly grabbed by my partner. The other bottle was without label, and contained white liquid. Warm, cow milk was the thing I had a will to drink when entering the inn. What a story!
I took a gulp, and after that noticed that there is something on the bottle under my hand.
Caption?

Leave me your opinion! Cancel reply